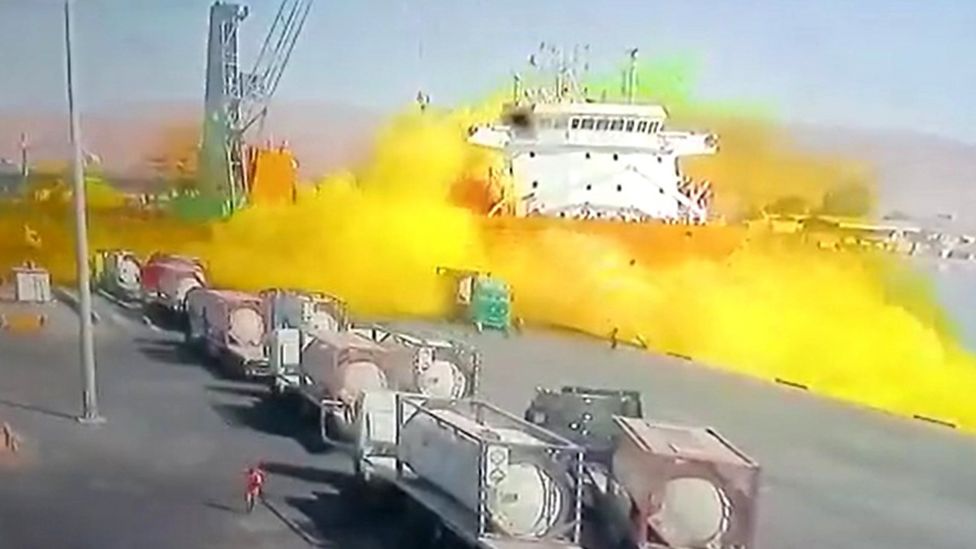 A leak of toxic chlorine gas at Jordan's Red Sea port of Aqaba has killed 13 people and injured more than 260 others, state media report.

Authorities said a chemical storage container fell while being transported as a result of a crane malfunction.

CCTV footage showed the container being hoisted into the air and then suddenly dropping on to a ship and exploding.

A large cloud of bright yellow gas is seen spreading across the ground, sending people running for safety.

State media said on Monday night that 123 of the injured were still being treated at local hospitals for chemical exposure. Some were reportedly in a critical condition.

Chlorine is a chemical used in industry and in household cleaning products. It is a yellow-green gas at normal temperature and pressure, but is usually pressurised and cooled for storage and shipment.

When chlorine is inhaled, swallowed or comes into contact with skin, it reacts with water to produce acids that damage cells in the body. Inhaling high levels of chlorine causes fluid to build up in the lungs - a life-threatening condition known as pulmonary oedema.

Residents of Aqaba city, which is 16km (10 miles) north of the port, were advised to stay inside and close windows and doors following the leak, which happened at 15:15 (12:15 GMT) on Monday.

Aqaba's southern beach, which is only 7km away and is a popular tourist destination, was also evacuated as a precaution, AFP news agency reported.

After several hours Minister of State for Media Affairs Faisal Shboul declared that there was no longer any risk to the city and its residents.

The Civil Defence Department sent specialist teams to the port to deal with the leak and clean-up operation.

Prime Minister Bisher al-Khasawneh flew to Aqaba and visited a hospital that was treating some of the injured.

He ordered Interior Minister Mazen Faraya to oversee a transparent investigation into the "regrettable" tragedy and to guarantee "all resources to ensure the total security of workers at the ports and all necessary precautions in relation to hazardous materials".

The deputy director of Aqaba's port told AlMamlaka TV that an "iron rope" carrying the container "broke" while it was being loaded on to a vessel.

The container was filled with between 25 and 30 tonnes of chlorine and was being exported to Djibouti.