THE U.S. FEDERAL RESERVE’S TAKE ON GREENING THE ECONOMY: NOT OUR JOB 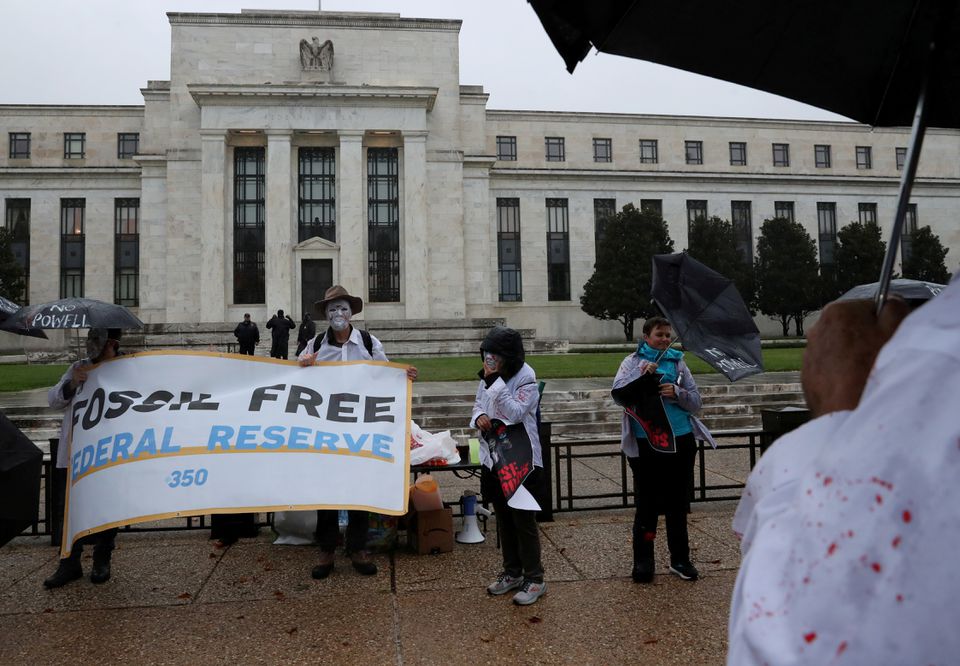 The U.S. Federal Reserve trails other major central banks in tackling climate risk, despite President Joe Biden’s pledge of a “whole-of-government” approach and efforts to salvage his ambitious climate agenda.

In recent years, the Federal Reserve has only begun to examine how weather patterns affect its ability to perform its duties, which include protecting the financial system through bank regulation, and combating economic shocks through monetary policy.

While the Federal Reserve is putting more effort into studying climate-related impacts, it treats climate risk as simply another element that influences the economic and financial landscape, like trade or childcare policy, rather than as anything the Fed might attempt to shape.

That puts it well behind its rivals who are gearing up to buy green assets, reduce fossil-fuel lending, and push businesses towards lower-carbon alternatives.

Analysts and activists argue that the world’s most powerful central bank” inability to prioritize climate change efforts will have consequences, not only for the United States economy, but for a global financial system whose largest actors are in New York.

Sanjay Patnaik, a Brookings Institution fellow specializing in climate policy, said, “If [the United States] are late-comers, it won’t be good for our markets, or it will not be beneficial to our firms.” “The United States doesn’t want to fall behind, or our financial system will be more susceptible to climate change risk.”

Fed policymakers could catch up quickly “if they engage fully,” he added, particularly by implementing stress tests to assess banks’ vulnerability to climate risks such as higher temperatures or loans financing fossil fuels. The Bank of England has already begun such tests, with a view to using the results to compel banks to be more prepared.

Such tests may fall under the Fed’s own responsibility for financial stability, and Fed officials have said they will examine the possibility. But, fearing a backlash on what is regarded as sweltering US political ground, they maintain it’s up to Congress, not them, to encourage businesses to go green.

“We are not and we don’t seek to be climate policymakers as such,” Fed Chair Jerome Powell declared this summer.

LETTING OTHERS LEAD CAN NOTHEWORE.

In the past year, the Bank of England and the European Central Bank have released detailed measures to assist manage the transition to a greener economy, including using their asset-buying clout to selectively benefit less-polluting businesses.

By contrast, the Federal Reserve, which is the central bank of the world’s largest greenhouse-gas producing nation, remains stuck at the starting gate. It was the last major central bank to join the Network for Greening the Financial System when it joined in December 2020, and has just begun an effort to assess financial-stability risks from climate change, but has yet to announce any new measures to address it.

“When I think about why are other banks ahead of us, and they are, it’s because those governments decided some years ago that these are serious risks,” San Francisco Fed President Mary Daly said recently. Her bank has several economists leading the charge at the Fed on climate-change research.

Others, such as the ECB and People’s Bank of China, have begun green bond programs, which invest in green energy projects to aid a transition to alternative energy. The Federal Reserve considers such measures to be beyond its economic and financial stability mandates.

“If climate impacts occur and they are stifling our economy’s growth and putting us below our potential, it would be our duty to lean against the risks,” she added, although she noted that that’d be different from reducing climate risk directly.

The Fed’s role is “not to pull levers that would do that.” It’s really to be students of it so we’re well prepared,” Daly said.

CALLS FOR ACTION ARE AVAILABLE FOR ALL OF THESE.

Last Friday, activists demonstrated at many of the regional Fed banks and the Fed Board in Washington, urging more action and Powell’s replacement with a climate leader. Powell awaits Biden’s decision on whether to nominate him for a second term, with critics branding his claim of climate change as ‘a long-term issue’ dreadfully.

“What we are pushing for is an aggressive level of regulation that we don’t think he has the appetite for,” Kathleen Brophy, senior strategist at the Sunrise Project, a youth environmental activist group that helped organize the protests. “They have certainly increased their stance on this issue for certain, but it doesn’t match the urgency,”

Others point out that the Fed is stuck between an administration with a much bolder climate change agenda than in the Trump era and stalemate between partisanship between Republicans and Democrats in Congress who oppose climate action.

Even the smallest steps taken so far have sparked some criticism.

Republican Senator Pat Toomey blasted the bank’s climate-change research as “politically motivated” in a letter to Daly, asking the Fed to drop what he called mission creep.

Toomey said, “Such actions are incompatible with the Federal Reserve’s statutory responsibilities; only Congress has the authority to reform the Reserve or modify its function,” adding that “it is up to Congress to do so.”

Analysts say that while the Fed’s mandate is somewhat limited, its responsibilities are vast and this is where it can take a stand on climate change.

Paul Fisher, a former policymaker at the Bank of England who coordinated its climate initiatives, said: “I think the Fed can and should be ahead, in the sense that it’s their job to supervise banks.” “Climate change is a real threat to banks, and they must monitor that… supervisors should be able to do this quietly in the background. Most of the banks recognize it’s a financial risk. It shouldn’t be that controversial.”

And the Fed is continuing on its exploratory path. In October, it signed on to a report on climate-related financial risk with other U.S. regulators that for the first time classified global warming as causing financial risks.

“That’s the primary contribution of the…report,” Patnaik said. “How do you get people to care about something?” You tell them it’s a risk to their livelihood and assets.”